Psychics - What can they help you with?

What is a psychic? And what can they do for you?

What exactly is a psychic? A genuine gifted psychic is a person with extra sensory perception. They rely mostly upon their sixth chakra, also known as the third eye. A psychic is highly intuitive and acquires information by tuning into the energy surrounding the person he or she is reading. They are more open to things outside of what our normal five senses perceive. There are a couple different ways to perceive this information. Some psychics get strong gut feelings or visions about events that already happened or that are yet to come. Others simply hear these messages being delivered to them. It is not uncommon for psychics to receive their information in one or more different ways. Keep reading to learn all about psychics and how they work!

History of psychics, seers and prophets

Many different systems of divination and fortune-telling date all the way back to ancient times. The most widely known system of early civilization fortune-telling was probably astrology. Some fortune-tellers were said to be able to make predictions without the use of these elaborate systems (or in conjunction with them), through some sort of direct apprehension or vision of the future. These people were known as seers or prophets, and in later times as clairvoyants (French word meaning "clear sight" or "clear seeing") and psychics.

How does a psychic work?

We are all connected on an energetic level and a good psychic is able to tune into this energy to develop insights into certain issues or patterns. This energy is ever-present and always surrounds us.

There are a lot of topics people contact psychics about. More and more people ask for psychic readings nowadays. Whether you are not sure if your partner is right for you or if you are making the right career choices, if you have financial problems or if you would like to know what is in store for you in the love department.

Sometimes we just can't seem to find the answers within. A psychic can give you insights and advice about the past, present and future. A professional psychic won't tell you what to do or which road you should follow. They merely suggest or open you up to ideas and situations you might have never thought of before. Taking action is entirely up to you.

A true psychic is not only there to advice you or give you answers but can easily be a listening ear or a friend in a time of need. Most psychics understand that life challenges us and that we are all here for a higher good. Our challenges help us grow and we can always ask for a little help. When we feel good about ourselves and our situation our life changes for the better.

Get free live chat with a psychic now!

Clairvoyance - Clear seeing: The ability to see or have visions. Clairvoyants have the ability to "see" things presented to them in the Mind's eye or the Third eye. They are able to see these visions as mental flashes which include pictures of people, places, scenes, objects, spirit, symbols as well as colours. These visions can also be about the past, present and future.

Clairaudience - Clear Hearing: The ability to "hear" messages from the spirit realm. Messages are being transmitted directly into the mind. Sometimes they only here single words that they need to put together. Like names, numbers, places etc. While other times they can here whole sentences.

Clairsentience - Sensing feeling: This is often described as 'gut feeling' or intuition. Someine who is a clairsentient has the ability to sense and feel emotions from spirit as well as the emotions from other people both positive and negative.  They can feel when someone is happy or sad. Sometimes they can even feel the physical pain of another person. But feelings can also come as warnings. They can ger a feeling that something is not right or get an excited, happy feeling when something wonderful is about to happen.

Clairalience - Sense of smell: The ability to smell a fragrance or odour that is being transmitted by the spirit. It can be related to the spirit who is sending the message such as smelling cigarettes for someone who smoked or the person's favourite perfume. But it could also be that they smell fire when someone died in a fire accident or smell cookies in the oven when some loved to bake.

Althoug psychics mostly rely upon their psychic abilities they often use 1 or more tools to help them retreive even more information about a person or situation. These are the most common tools they use.

What to expect from a psychic reading?

A psychic reading can be very helpful, personal and also a lot of fun. Psychic readings are for your own personal development. It is a great way to receive expert guidance on numerous subjects. In some cases a psychic uses tarot cards, numerology or even astrology to receive more and accurate information. These tools will act like a channel to them. Some psychics find it helpful to look at a photograph of the person in question, as they read their energy. Some psychics are able to visually see and read your aura. An aura contains all information about your physical, spiritual and emotional health. A psychic can also help you when particular dreams recur.

You can ask a specific question if you are looking for answers or you may care for a general reading. In a general reading the psychic will mainly pick up on information that is most important for you at this time and will immediately sense what is going on in your life right now. They can ask you questions so that you are able to validate that they are on the right track and zooming into the right energy. Even if you would just like to know what is on your horizon, contacting a psychic could be exactly what you are looking for. They will help you find the right direction to empower you and make decisions. Psychics will be able to determine the most likely outcome of a situation, should you continue on the same path. They will also be able to show you other options or choices you can make if you desire a different result.

A real and experienced psychic is positive and gentle in their approach. From them you can expect detailed information and insights regarding your inquiry. But more importantly they will help and guide you on your physical and spiritual journey through life.

A good psychic reading should end with you feeling happy and clear about the choices that are open to you and more optimistic about the wonderful things that still lie ahead of you.

If you are interested in receiving a psychic reading you can register a free account for a online chat rooms. When you are registered you can chat for free for unlimited time so you can get to know our psychics before receiving a private psychic reading. You are free to ask the Psychic anything you would like about his or her work, the Psychic's gifts and abilities and also about spirituality in general! During the free chat you can see the Psychic via webcam, and sometimes also hear him or her via microphone.

You can enjoy our free Psychic chat without limitations. We would like to invite you to join us and get sociable in one of our highly experienced online Psychic's chat rooms. All of our online Psychics are available for free chat for absolutely anyone who would like to join in the conversation! Needless to say, there mostly will be other visitors present in the same chat room as you. It's a really fun and relaxed way to also meet like-minded people!

Often times, the Psychic's are willing to give short free demo's or free trials. Sometimes you can even get 1 psychic question answered for free! Even if you don't want to be the center of attention in a chat room full of other people, it can be quite exciting to see how the Psychic works when he or she reads for another person. This way you can get to see if this is what you are looking for, and if you would maybe consider a private reading with this certain Psychic.

Or validate your credit card and get 10.000 free credits for a free psychic reading right away!

Get a professional psychic phone reading for answers! 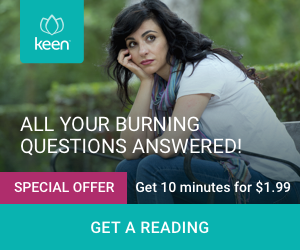 Would you rather talk to a prove psychic over the phone? No problem! We have the best online psychics who are able to provide accurate psychic phone readings 24/7!

What's in store for your future? Here's 3 free minutes with a gifted psychic!

We use cookies to enable the proper functioning and security of our website, and to offer you the best possible user experience.

You can customize your cookie preferences here. Enable or disable the following categories and save your selection.